The 3rd Balatonfüred Concours d’Elegance was held between 13-15 May on the shores of the Balaton Lake in Hungary. ceautoclassic was an integral part of the organisation committee. Here’s our insider’s report on this terrific weekend. 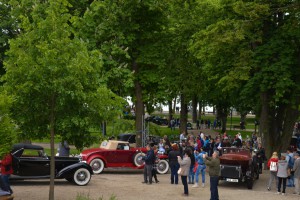 Last year I was asked by Viktor Valker and Katti Zoób to join their team which set out to create an internationally recognised Concours d’Elegance in Hungary. I am very happy to say that in 2016 with support from BMW we have reached that goal.

Oldtimer Magazin in the Czech Republic became our official media partner and their efforts paid off. We also received assistance from Karel Kupka, editor of the Czech Motor Journal and the editors of Veteran.sk. Special thanks goes to Pavol Skala, who convinced several Slovakian collectors to join us. Libor Kiss and his brother kept in touch with the Czech and Slovak collectors conducting hundreds of phone calls and emails. So it was a team effort, which led to 54 cars which gathered together at Balatonfüred, on the shores of the Balaton Lake on 13 May.

Two cars from the Czech Veteran Arena, a Tatra 75 Bohemia Roadster and a 1936 Wikov were driven directly from Olomuc. Several other cars, including two Bugatti cars and a Rolls-Royce drove from Győr in convoy to Balatonfüred. A Tatra 603 which had mechanical problems, joined us at the last minute – the family started their journey Saturday at around 4 AM and arrived to the Balaton Lake on time. Three cars arrived from the BMW Museum, a 315/1 roadster, a 507 and a Z8. The 507 became a favourite by the public.

Weather was not really ideal, but this did not deter the participants. Visitors also braved the weather. The sun came out during Saturday afternoon, which resulted in a new wave of visitors.

On Saturday several fashion shows were held by the Katti Zoób fashion house, inspired by 100 years of BMW.