Július Kubinský was a Slovak-born Formula 1 constructor in Brno. His story reflects the effects of the Second World War and the changing political and economical climate afterwards

From 1918 to 1938, during the era of the First Czechoslovak Republic, there were plenty of coachbuilder shops in the country, who responded to the demand of individual automobile bodies. During the war some of these companies focused on military production.

Afterwards there was a brief period of hope, a chance to return to pre-war working arrangements. This was followed by the Communist takeover and the nationalization of private enterprises. It was during this chaotic era Július Kubinský developed a racing car with a modified Lancia in 1950. Called the Mono JK, it was dubbed the first “Slovakian Grand Prix racer” by historians. 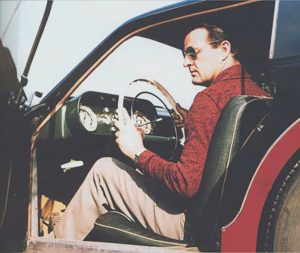 He spent most of his youth at the airport in his native Prievidza, where he gained a relationship with technology and improved his constructive skills. He was a keen pilot of non-powered aircraft.

After the war Kubinský worked at the Koller workshop in Bratislava. Together with Ondrej Koller they realised a few sports cars based on the then ubiquitous KdF 82 military vehicle. The Koller company has been busy reparining these cars, so they had a lot of parts available. Kubinský developed a new body, then created a functional prototype with a KdF engine, called the K&K. Plans called for the production of 10 units, but the nationalization of the workshop put an end to project.

Július Kubinsky left Bratislava in 1946 for a job opportunity at the Karosa bus company in Brno. In his free time, he contemplated a new sportscar. For the designer who loved speed and adrenaline, there was no bigger challenge than building a real Grand Prix racing car!

Though racing cars were not hight on the priority list, but Kubinsky received support from Karosa for his Mono project. He was provided ample space at the Jungmann car repairshop in Brno, which belonged to Karosa. It was here that he began building his first Mono JK-1 with a four-cylinder KdF engine and a Roots compressor. The vehicle has taken part in many races with different drivers, but it failed to achieve any significant results.

In February 1950 on the 32nd page of Automoto magazine, an article entitled “The First Slovak Race Car” was published, which introduced Július Kubinsky’s F1 Monoposto racer to the readers. According to the magazine, it was the first car in Slovakia built for speed races. The author of the article hoped that the first Slovak rider Miro Jurča will be the driver of the monoposto. Jurča previously had some victories under his belt in a BMW monoposto. The Mono JK-2 was powered by a modified Lancia 1.5-litre V4 engine, which was installed in front of the rear axle. Thanks to a one-stage Roots compressor, the car had a maximum speed was 230 km/h.

Battle for the Grand Prix

The aluminum body with a thickness of only 0.88 mm was fitted on a lightweight tube-frame chassis. The vehicle weighed just 435 kg. Kubinský entered this car at the 1949 GP of Czechoslovakia in Brno, with Karl Vlašín at its helm, but during training a water pipe failed and the car was withdrawn.

A year later they completed compulsory braking tests and improved the monoposto. In addition to the JK-2 type, Kubinský also made three different racing cars powered by BMW 321, BMW 328 and a 2000 cc Alfa Romeo engines.

In general, it is very difficult to precisely define whether Mono is more Slovak or Czech. Regardless of the “nationality” of the vehicle, it is a very interesting history of design and motor sport that should be not forgotten.

Jk2500
He has also developed a sports two-door coupe in 1957. Its shape resembled an Alfa Romeo. It was powered by a Tatra V8 2500 engine. The director of Tatra in Kopřivnice liked the car and wanted to produce a small series, but he couldn’t secure enough money so Kubinsky returned to Brno.

In his own car design, he continued with the Eso racing car and the construction of simple four-wheel vehicles based on the Velorex three-wheeler. He has become a renowned specialist in façade lifts, metal facades and aviation technology. For example, his special elevator crane cab or folding plane with a vibrating camera system is well known.

We would like to express our thanks to Maros Schmidt from Slovak Design Museum and Dennik N for the information sources, photos and research assistance for this article.