An interesting sports prototype is now being offered for sale in the United Kingdom. It’s a typical tale from the time when the Iron Curtain fell and East European car manufacturers were on the lookout for radical ideas.

Professor Tony Stevens, who in the 1960s worked for the Rootes Group (Hillman, Sunbeam etc.) set up his own company in 1972. A series of interesting low volume cars came out of his shop, including the Cipher. The Cipher, sporting Reliant mechanics was shown at the 1980 Birmingham International Motor Show. “The Cipher got rave reviews from all the press, and dealers committed themselves from all over the country and abroad. However despite all this interest, upon going back to the banks for funding we got nothing” recalled the Professor.

“Since the original Cipher there have been many reincarnations, with potential manufacturers in America, Russia, lndia, and most recently, Malaysia. The Malaysian Cipher is larger than the original with front wheel drive, both open and coupe models exist, with Proton / Mitsubishi power train” he added. 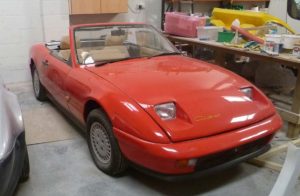 In the Summer of 2018 Professor Stevens decided to sell the one-off Lada Cipher and he attached a press clipping from a 1990 Autocar, which says, among other things: “The car has been redesigned and reengineered and is now a two-plus-two, built to accomodate a 1.3-litre Russian engine and front-wheel-drive.
The plan is annual production of 60-70,000 cars by Stevens’s Russian partner. Backing is from both NAMI, the Soviet automobile ministry, and from a large US bank. Under the scheme the Cipher would be assembled in Lithuania using both local and UK-sourced parts. Cars would then be exported to all world markets”.

Nothing came out of this overly ambitious project and after 28 years, the car will now come out from storage!
Further details: http://www.stevens-cipher.com/images/lada_stevens_prototype.pdf