MLADA BOLESLAV, 17 November, 2014: The world’s only surviving example of a ŠKODA 966 Supersport has been restored to its former glory. ŠKODA specialists have been working with great care on the renovation of this vehicle for the past year, and now visitors to the ŠKODA museum can admire the automotive gem as it was originally presented in the 1950s. 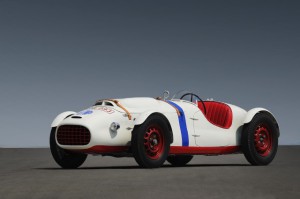 ​It was back in 1950 that three copies of the special racing edition of the ŠKODA 966 Supersport were built. Last seen on the racing track in 1962, only one has survived to this day. For many years, the car was owned by the Slovakian racing driver Ivan Mičík, and in 2007 the vehicle was acquired by the ŠKODA museum where its extensive renovation began. The restoration was carried out authentically, according to contemporary documents. The ŠKODA 966 Supersport, now shining once again as it did in the season of 1953, can be seen as part of the current museum exhibition. 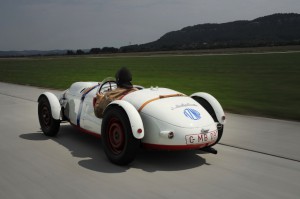 “The ŠKODA 966 Supersport provides an important testimony to our history in motorsport. This conveys the atmosphere of the legendary lap racing from the second half of the 20th century perfectly,” says Michal Velebný, head of the restoration workshop at ŠKODA. “Given the uniqueness of this vehicle, this is one of the most interesting exhibits at the ŠKODA Museum,” he adds.

The special racing edition, the ŠKODA 966 Supersport with an aluminium body, was introduced in 1950, and the model stood out due to its high variability. After minor adjustments to the body in the form of covering the passenger seats and removing the headlights and fenders, the vehicle could also be used in the racing car category.

The ŠKODA 966 Supersport celebrated its premiere in the May of 1950 in Mladá Boleslav. After two more races, however, the vehicle was so badly damaged that it had to be replaced by another. Since the factory team’s objective was to bring two vehicles into operation, an additional vehicle was produced – the third in the series. It was this third vehicle that has been preserved and has undergone full restoration.

The vehicle made its debut for the Grand Prix of Czechoslovakia on 24 September 1950. The car took racing driver Miroslav Fousek to second place in the category of up to 1100cc. The 1951 racing season began with victory in the sports car category at the races in Liberec.

In the following years, both Supersport vehicles – the second and third built – appeared in numerous races. After a serious injury, Miroslav Fousek was replaced by Jaroslav Netušil. The second vehicle had been driven by Václav Bobek up until then.

ŠKODA improved both of the racing cars, especially the engines used. The assembly with a displacement of 1089cc was originally derived from the ŠKODA Tudor, but this was given a new aluminium cylinder head with hemispherical combustion chamber. There was a version with atmospheric aspiration and two carburettors, and the most powerful version with one or even two compressors. One could tell the two vehicles apart by the height of the bonnet; the turbocharged version had a lower bonnet. Under the higher bonnet with a pronounced ‘bulge’ were two carburettors.

Given the versatility of the drive unit and especially the speed of the conversion, both ŠKODA 966 Super Sport vehicles could take part in the 1100cc class (for the version with the carburettor) or in the 1500 category (for the version with the compressor). For a further increase in power, in line with new racing rules, ŠKODA later changed the engine capacity to 1221 cc. In the final phase of development, a new prototype engine was installed under the bonnet with a capacity of 1500cc and either four carburettors, and/or two compressors.

The engine with carburettors achieved an output of up to 66 kW (90 hp) and the supercharged version even up to 132 kW (180 hp), reaching speeds almost breaking the 200 km/h barrier. Due to the considerable number of pipes in the engine compartment, the model with the compressor was also known as “gasworks”.

At the same time, the racing cars also underwent considerable improvement. A condenser was placed in front of the compressor to improve the cooling of the supercharged version. During the 1953 season, the designers improved the vehicle’s aerodynamics by lowering the radiator grille and making the suction opening more oval. By the end of 1953, the car had been installed with a new engine with a capacity of 1500cc. In the autumn of 1953, Václav Bobek achieved a new speed record of 197.8km/h in the version with two compressors, making the ŠKODA 966 Supersport the fastest automobile in Czechoslovakia at that time.

The final adjustments to the bodywork took place during 1954. Due to the changes in the rules, the Supersport received large fenders that were firmly attached to the body. Jaroslav Netušil raced in the now newly restored vehicle in 1955. Development of the new ŠKODA 1100 Special OHC – the Supersport’s successor – began one year later. In the following years, both ŠKODA Supersport 966 vehicles were used to train future racing drivers. 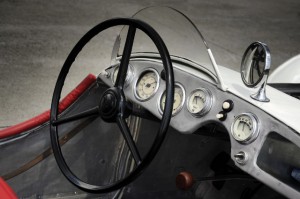