Skip to content
Several great pre-war racing cars ended up behind the Iron Curtain. Most of the Auto Union Silver Arrows have been shipped to the Soviet Union by the Red Army, while two Mercedes W154 racers have been left behind in Romania. The story of two pre-war Mercedes-Benz W154 Grand Prix racers have been the subject of at least two articles in the Western Press: Simon Moore wrote an article in the May, 1987 issue of Classic&Sportscar, while Doug Nye recalled his trip to Romania in the February, 2013 issue of MotorSport magazine. While they pierced the heart of this story, language barriers prevented them from learning the fine details. In Romania the story is part of the local classic car folklore. The main actors were ethnic Hungarians living in Transsylvania. In 2008 a sports historian in Cluj Napoca (Kolozsvár) published a booklet in Hungarian, which introduced another angle of this story. We don’t want to be the judge here, we just present the different accounts. Once thing is certain: the Red Army brought along two Mercedes-Benz W154 Grand Prix racing cars, chassis Nr 189437 (Nr7) and 189445 (Nr15). Chassis 189437 or ‘Wagen 7′ was originally built for Rudolf Caracciola’s aborted Indy 500 venture. It finally made its debut in July of 1938 when Dick Seaman drove Wagen 7 to victory in the all-important German Grand Prix at the Nürburgring. The talented English driver added a second and third to the chassis’ tally before the season was out. In 1939 this W154 was allocated to Hermann Lang. He won four major races that year, making Wagen 7 the winningest of all W154s constructed. Chassis 189445 was the fifteenth and final Mercedes-Benz W154 constructed. It was first raced by Manfred von Brauchitsch during the 1939 Belgrade Grand Prix. He finished second behind Tazio Nuvolari in the Auto Union. 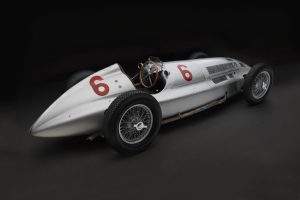 What happened after the war and who found the cars, are subject of opinion. Many believe that it was Jozsef Roman, nicknamed Joska. His son Tibor (or Tiberiu in Romanian) offered this story to Doug Nye: “My father was an automobile and motorbike nut, a mechanic and a car racer. Around 1946 he learned there were two old Mercedes cars in a scrapyard in Braila” [near the port of Constanta, on the Black Sea]. Jozska talked the Bucharest authorities into allowing him to collect the cars… They were the property of the Ministry but were assigned to the Cluj Railways Sports Club where my father was given the right to repair and race them”. Simon Moore also identified Jozsef Roman as the one who saved the cars: “During the second half of 1945, a Rumanian engineer called Joska Roman found two W154 on the docks at a Black Sea port, all jumbled up with scrap being shipped back to Russia. He acquired them and took them home to Cluj in the western part of the country. He found that one was complete except for tyres, and the other less so. He fitted truck tyres to the complete car and ran in a hillclimb; unfortunately he crashed heavily due to lack of proper adhesion from the rear tyres in the wet, and the car caught fire” 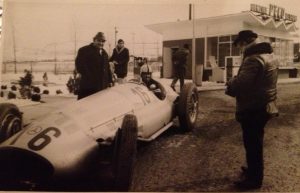 Photo by Rusu Alexandru However there is another suitor, who would like to vindicate the title of “discoverer” András Killényi, a sports historian in Cluj Napoca met Gábor Weinbach (Weinbach-Verbőczy), a mechanic in Cluj Napoca, who told a totally different story: (Editor’s note: Weibach’s account contains some inconsitencies and confusions, but I believe it is still interesting) “In 1948 I returned home to Cluj Napoca. I got a job at the garage of Căile Ferate Române, the Romanian train operator. One day I went down to Galaţi (Galac) where I heard the Soviets were selling tools. That’s where I saw the two cars. They were asking 40,000 Romanian lei, but I did not have that much money. By the time I got the money and returned to Galaţi the cars disappeared. So I talked to Jozsef Roman, who was one of our drivers and who had very good connections. He told me that the cars are in Bucharest with the automobile club. One of them has been disassembled.” This was in 1951. By that time Weibach was working at Întreprinderea Regională de Transporturi Auto, the Regional Car Transport Company. Upon hearing the story of the two cars, its director told Weibach: “if you undertake the repairwork, I’ll arrange those to be transported here”. First a body-less car arrived (189945), which had no spark plugs as well. Here’s Weibach’s recollection of the repairwork: “It took me four years to repair that car. The cylinders had to be rechromed. The missing rings were replaced with Skoda rings. A local tinsmith fabricated a new body, based on photographs. The biggest hurdle was the lack of ignition magneto. Eventually I got two Scintilla magnetos, which had to be rebuilt. 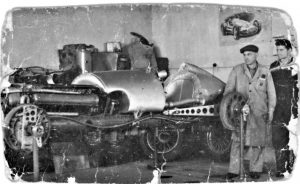 The car in the workshop. Photo is from the book of András Killyéni During the first test drive we used charcoal mixed with castor oil as fuel. It was very fast”. Weibach later got the second car in disassembled state. He quickly reassembled it and then Joska Roman participated with this car at the 1956 Feleac hillclimb race and had a big accident. The car was reapaired, but then again it had an accident. Later the garage had to be cleared and that is when Jozsef Roman brought the two cars home. 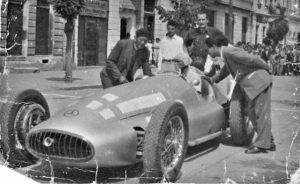 Jozsef Roman in the car before the 1956 Feleac Race. Photo is from the book of András Killyéni Over to Tibor Roman: My father wanted to donate these two vehicles to the University but it was not allowed. Then we went to Bucharest, and since I knew the people in charge, we told them the country could sell these cars and buy new motorbikes for the money. But the financial person in charge said ‘Why don’t you buy them?’. The Ministry of Culture and Sport then sold us the cars for 2000 Lei [for the pair] — a very big monthly wage!” Which Tibor paid. The receipt, of April 14, 1965, declared a remarkably specific repair estimate of 53,972 Lei. Jozska and Tibor then shared ownership 50:50. In 1971 they sold their undamaged car, chassis No7, for a reputed sum of $80,000 paid to the Rumanian Government, plus two brand-new Mercedes and a VW Beetle. “We sold two cars, bought a house from one of them and lived from the other, while the third became the family car”. The buyer was Dr Georg Ott of Munich, acting on behalf of Dieter Holterbosch of New York. It was shipped to Stuttgart early in 1972 where some minor work was carried out to get the engine running, but not up to racing revs. It did not have wheels when it left Rumania, but Mercedes made up new wheels centers and Borrani built new wire wheels. Dunlop supplied the tyres, and the car was shipped to New York in the autumn of 1972. Then the car was sold to Joel Finn in 1980 and he has had the engine rebuilt. Today It is in the private collection of Arturo Keller in Sonoma, California. Eventually a huge confusion erupted around No15. Tibor Roman sold the car to Dr Andre Bilciurescu, a Romanian dissident who ran dental equipment business in Neuchatel, Switzerland in 1988. But there were others who claimed ownership of No15 and sold the car to others! Lawsuits followed and it was not until 2001 that the clouds settled. Today No15 is in the Colliers Collection – Revs Institute in Naples, Florida. Sources: Title picture by Rusu Alexandru András Killyéni: Ezüstnyíl História (Story of the Silver Arrow), Cluj Napoca, 2008 http://mek.oszk.hu/10700/10783/10783.pdf András Killyéni: Kolozsvári nyilak (Arrows from Cluj Napoca) https://en.calameo.com/read/001270630a13a3db02b31 Doug Nye: The arrow that pierced the iron curtain MotorSport Magazine, February, 2013 https://www.motorsportmagazine.com/archive/article/february-2013/102/arrow-pierced-iron-curtain Hidden Treasures MotorSport Magazine, March, 2013 https://www.motorsportmagazine.com/archive/article/march-2013/143/hidden-treasures Mercedes Benz W154 https://forums.autosport.com/topic/59819-mercedes-benz-w154-merged/page-2 Mercedes W154, 189437 https://www.ultimatecarpage.com/chassis/208/Mercedes-Benz-W154-189437-7.html Mercedes W154, 189445 https://www.ultimatecarpage.com/chassis/209/Mercedes-Benz-W154-189445-15.html