The 4th Balatonfüred Concours d’Elegance was held between 5-7 May, on the shores of the Balaton Lake at the wonderful Tagore Promenade in Balatonfüred. For three years straight CEAutoclassic has been participating in the organisation of the event.

Participants started arriving from different Central European countries on a rainy Friday afternoon.
This year there were participants from Germany, Czech Republic, Slovakia, Hungary and for the first time from Romania as well. 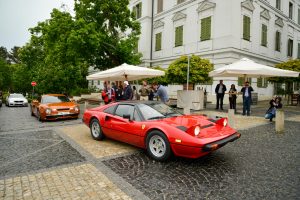 More than 50 cars, half of them built before the War lined up on Saturday early morning in excellent weather conditions, forecasting a nice relaxing weekend with beauty, horsepower and elegance merged together for all the participants and visitors.

As last year, many participants revisited Balatonfüred with a different automobile. We had the pleasure to meet our friends from Veteran Arena Olomouc again with a Wikov 35 (1931) and a Wikow 7/28 Sport (1930). Also Mr. Telecky and his colleague visited us from Olomouc region to show us the beauty of Praga cars with a Baby and a Piccolo (cabriolet Kellner) from 1931 for first time in Balatonfüred. Last but not least, prewar Czechoslovakian cars were represented by Aero S 1000 with Plachy body – from 4 pieces only this only one was saved.

Thankfully to our main sponsor BMW we had the chance to see many different BMW and Mini cars, including brand new models, youngtimers and oldtimers.

Every year in Balatonfüred we can see different Bugatti’s that are presented to us, this year they represented the brand with four cars (T44, 49, T40 and an Atlantic replica). Additionally this year the K&K Bugatti Register book was presented which deals with the story of the brand in the CEE region.

Enthusiasts of sport cars were not forgotten. There were three Ferraris to celebrate the 70th birthday of the brand, a Maserati Mistral, a Jaguar E-type, an MG TC, an early Chevrolet Corvette and more. Racing cars were shown in the form of replicas (Skoda RS130 replica, a replica of Niki Lauda’s Opel Rekord racer etc.), complemented by the brand new Hoffmann&Novague R200. 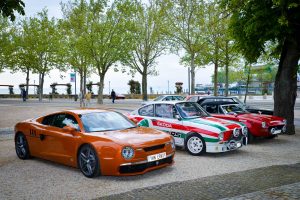 American automobiles were represented quite well, starting with the best of show winner Chrysler Airflow, Ford Mustang GT and so on.

We cannot forgot about oldest car on the show, a Unic L3 from 1925. The CEAutoClassic Award was given to a 1931 Mercedes Nürburg.

Late afternoon cars went back for a rest to the garage, to get ready for the Sunday’s award ceremony and participants had a wonderful gala dinner evening in Hotel Anna Grand.

Sunday’s ceremony on red carpet with thousands of visitors was on the way. No one went home empty-handed. Please find below the list of winners and our photogallery.

We hope to meet you next year for another wonderful event!