Back in the late 1960s, early 1970s research into electric vehicles became a hot topic behind the Iron Curtain. Naturally Soviet Union led the way, but there were other countries, like Bulgaria where electric transporters were developed. There was also an attempt in Hungary, which resulted in an electric Barkas

“Vehicles ran by battery, fuel cell or primary cells” – this was the title of an initiative put set forth by the Hungarian Technical Development Committee in 1971. It was financed by the Ministry of Forge and Machine Industry, together with the Ministry of Architecture and City Development. The work was done at Research Institute for the Electric Industry (Villamosipari Kutatóintézet), where a few one-off prototype electric vehicles were put together between 1966-1969.

The Research Institute worked on two vehicle conversions, as part of the research initiative. One of them was a hybrid Ikarus bus, the other was a Barkas B1000 small delivery van, which was turned into an electric vehicle. “We took out the engine and fuel tank, and installed an electric motor and a battery pack” – recalled one of the engineers. The first prototype was completed in 1973. The kerb weight of the Barkas increased from 1350 kg to 2700 kg, while its hauling ability was reduced to 500 kg from 1000 kg. To make matters worse, the car had a range of just 50 km. 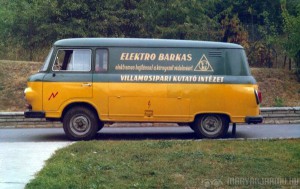 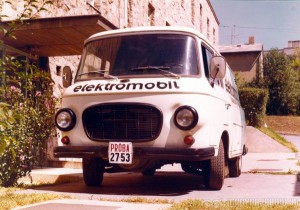 But an initiative is a serious thing, so by 1975 a run of 10 cars were completed. The Hungarian Post was asked to test them. Postal workers did not like the electric Barkas. The car was very heavy, and the battery packs were very sensitive, so the car often got stranded on the road. After a little while, the Post just got rid of the cumbersome cars.

In the meantima the initiative also ran its course and it was the end of electric vehicle development in Hungary.

You can read more about this in Hungarian on our sister site, magyarjarmu.hu