After the 2nd World War shortage of fuel, lack of proper racing cars and even officias shunning the sport couldn’t prevent enthusiasts to return to the autosport. In this short overview, we try to look at some of the materials available on the subject.

How many of our readers heard of Michał Nahorski? He was a Polish racing driver, who among other things built a small Lancia-powered racing cars in the early 1950s. 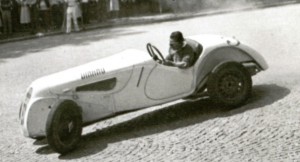 This is a BMW 328-based special by Marin Dumitrescu, a legendary Romanian racing driver.

And here’s one which is simply breath-taking 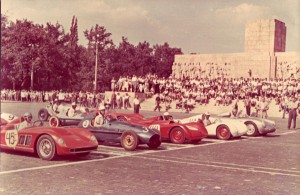 This picture was taken in 1957 in Budapest showing two Skoda 1100 OHC racing cars, a Porsche 550 Spyder from Yugoslavia, the RAK and Krab motorcycle-powered small racers from Poland and plenty of Hungarian racing cars.

As you can guess the situation was different in each country. Aero, a Czechoslovakian manufacturer attended the 24-hour LeMans race in 1949. And a lot of special racing cars were built in general repair shops, repair works of taxi companies etc.
Eastern Germany was also in a similar position. The Soviet Union, which harvested knowledge from a number of pre-war Auto Union racing cars which ended up there, saw racing cars built by local car manufacturers, ZIL and GAZ. Also a few specials were put together. But there were countries, like Hungary, where car racing was not really supported by the government until the mid-1950s.

A few years ago, a Russian friend of mine tried to put together an English-language site, with the aim of creating a database of racing cars built between the late 1940s and the early 1960s in countries behind the Iron Curtain, so Bulgaria, Romania, Soviet Union, Hungary, Czechoslovakia, Poland and Yugoslavia. Eventually the project died quietly.

While our team is not in a position right now to revive this idea, but we would like to offer you some pointers. Please find enclosed a list of some books. True, these books are not written in German or English, but language barriers aside, these are still highlz enjoyable. We would be happy to help you find copies of these books.

Czechoslovakia
– Karel Řepa: Premiéry nadšení. Nadas, 1989. 148 pages, b&w photos, colour drawings.
Though this book was published in 1989, it still offers a very good overview of all the Czech racing cars (factory of privately built) up to the 1980s. Each chapter features a time period

Soviet Union
– If you speak Russian, be sure to check out ussr-autosport.ru
– Dmitriy Dashko – Aleksey Rogachev: Speed. Gorkyclassic, 2013. 242 pages, b&w photos
This is a very big book with plenty of period shots.

Hungary
– Cars made in Hungary since 1945