This year marks the 110th anniversary of the Ford Model T, the car which put America and then the world on wheels. Several Hungarian engineers played a key role in its development.

This year marks the 110th anniversary of the Ford Model T, the car which put America and then the world on wheels. Several Hungarian engineers played a key role in its development. It is also worth pointing out that despite several often repeated articles, none of these great engineers had anything to do with the development of the modern assembly line. They were product engineers, not production organisers.

“By late 1907 Ford knew that there were many improvements that could be made to increase sales. In particular, the Models N and R were built only as two seaters. The Model S / SR saw a limited number of touring and town car bodies built. Ford was the leader in car sales world wide. He planned carefully for the launch of his new model, scheduled for 1909 model year.
To improve the design concept and to limit outside interference Ford had a “experimental room” walled off in one corner of the plant. Inside the experimental room only a few key employees were allowed to work full time, and fewer others were allowed to peek inside at the progress. The key employees who worked in the experimental room were engineer / draftsmen Joseph Galamb, Jules Hartenberger, Charles Balough, and Eugene Farkas. Henry Ford’s right hand man and fairly competent metallurgist / tool maker Childe Harold Wills ( he hated the name Childe and always signed his name C. Harold) was regularly in the room, and C.J Smith who fabricated parts for the new Ford.
…
The design team of Galamb, Farkas, Balough and Haltenberger were all Hungarian immigrants who frequently discussed the project in their home language.”
– this is how Royce Peterson recalled the birth of the Model T.

Let’s take a look at this team of Hungarians! 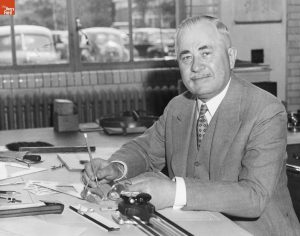 József “Joe” Galamb was born in Makó on 3 February, 1881 He completed his high school in Szeged, before enrolling at the Hungarian Royal Public Higher Industrial School in Budapest. He also took some courses at the Joseph Technical University.
After graduation he worked as a draftsman, before his compulsory military service. Later on he went to Germany to gain experience, where he worked for the Adler car company. Together with his friends he sailed to America in October, 1903 to visit the World Fair at Saint Louis.
On 11 December, 1905 Galamb accepted a job offer from the Ford Motor Company. It was not the first automobile venture of Henry Ford, but it went on to become its most succesful one. Later other Hungarians, like his old school buddy, Charles Balough (Karoly Balogh) and Eugene Farkas joined him. “Our European drafting style was quite different and it attracted the attention of Henry Ford” recalled Galamb later on.
Henry called him the Dutchman, because he couldn’t understand a word of what the Hungarians spoke.
In 1907 Henry asked Galamb to join the very small team, which worked on a brand new model. “Joe, I’ve got an idea to design a new car. Fix a plat for yourself on the thir floor way back” reaclled Galam later on how the Model T project was started. Ford later spent a lot of time in Galamb’s private room, where later Charles Balough, Eugene Farkas and Jules Haltenberger also appeared. It was Galamb who designed the planetary gearbox and converted Henry Ford’s ideas into technical drawings.
When the Model T went on sale and complaints came in from Model T owners, it was Galamb’s responsibility to design still more durable replacemenet parts. Though he worked largely as a “chief engineer” a properformal organization chart has only been devised in 1919. By this time, Galamb married Dorothy Beckham
During the First World War Galamb was given responbility for building submarine detectors of British design for use on the Ford Eagle boats. In addition, he designed a lightweight two-man tank driven by two Model T engines. From 1915 together with Eugene Farkas he developed the new Fordson tractor.
After 1923, Galamb occupied an office in the new Dearborn Engineering Laboratory, where Ford engineering was centralized. Through the 1930s, Galamb had automotive body and frame design responsibility.
Galamb retired in April, 1944 and died in December, 1955. 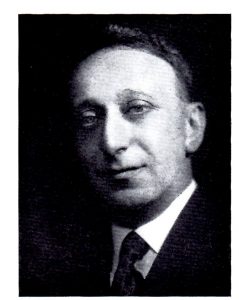 Charles was born on February 13, 1883, in Nagylak, Hungary, the son of Albert and Sarolta Balogh. He had six older brothers and sisters.
He was educated in a Priarist Gymnasium (High School) in Szeged. He then went on to Budapest to further his education. He graduated in 1901 at age 19 with a degree in mechanical engineering from the Technical University, now known as Óbuda University. At the University he met Joe Galamb and together with another friend, Mano Fischof they went to France and Germany. The three of them embarked on the trip to the USA together. Upon their arrival in New York they stayed with Mano’s cousin. Their intention was to work their way to and from the world’s fair with the intention of returning to Hungary.
After attending the world’s fair in the summer of 1904, Charles then worked for Warner Swasey Company in Cleveland, Ohio, and later joined Joe who was working in the American automotive world at the Stearns Automobile Company also located in Cleveland. After contacting several companies in Detroit including Olds Motor works, Charles then moved to Detroit, Michigan to work for Northern Automobile Company in 1905.
In early 1906, Joe Galamb who was by then working at Ford asked Charles to leave Northern to come over to Ford to help detail the drawings on the Model N. After that project was finished, Charles moved on to Cadillac to help design the tooling for Cadillac’s new four-cylinder engine. In 1907 at Joe’s request he again returned to Ford to help on a new project. He joined both Joe Galamb and Jules Haltenberger in the third floor experimental room to design the Ford Model T.
When the Model T project was completed, Charles moved on to Reliance Motor Truck and then to Rapid Motor Truck. Both truck companies joined the newly formed General Motors Corporation they become part of GMC Trucks.
He was married on December 11, 1909 to Eva Gertrude Myers of Jackson, Michigan. They had six children and 15 grandchildren.
In 1910 an automotive entrepreneur by the name of Mr. Brotherton commissioned Balough to design a new car. After completion of the prototype, Henry Ford convinced Mr. Brotherton not to produce the car. Henry Ford felt there were already too many car manufacturers at that time. As a result only the prototype was built.
The next move Charles Balough made was to Springfield to become the head engineer and plant manager of Kelly-Springfield Motor Trucks. Mr. Kelly had purchased the design of the Frayer Miller truck, and found it unsatisfactory. His first task was to redesign the entire line of trucks. He held that position until spring of 1915. Kelly-Springfield was booming as a result of the war in Europe. With this additional work the company was sold to New York investors. Charles found the company’s new president’s manners and methods offensive, so he resigned.
In 1915 the Balough family moved to Canton, Ohio where Charles was one of the founders of the Hercules Motor Manufacturing Co and went on to become its first president. During the First World War Hercules supplied engines to the Fordson tractor and the Libery truck.
In the 1920s as the Hercules Motors Corp. Throug the efforts of Balough, the company had a sales volume of over USD 1 million.
Hercules engines were no longer confined to truck and bus requirements, but Hercules power could be applied to all types of agricultural equipment from tractors to potato diggers, and for every civilian use imaginable, with the exception of aviation propulsion.
Balough also promoted the idea of a lightweight, highspeed heavy duty Diesel engine which went into production in the 1930s.
During the Second World War an incredible number of engines rolled down the Hercules assembly line into military trucks, armored cars, military tractors, bridge building trucks, landing craft, generator units etc.
Balough retired in 1958. He passed away on January 24th 1966.

(Courtesy: The Henry Ford)
Eugene Farkas was born in Káld, Hungary in October, 1881. He graduated from the Royal Joseph Technical University in 1904. Afterwards he spent one year in compulsory army training.
Returning to civil life he worked as an apprentice at a motorcycle factory, then he set sail to the United States in the fall of 1906.
Farkas quickly became interested in automotive design. In 1907 he moved around in Detroit working briefly for Ford, Cadillac etc.
In early 1908 he was again employed by Ford, where his good friend, Joseph Galamb hired him back. The two men roomed together and took rides together in Galamb’s Ford. Farkas designed tools and fixtures for the upcoming Model T engine production. But he couldn’t get along with Jules Haltenberger (see below) and after a fight, both men were fired.
Between 1909-1913 he found work at a string of different car companies, first as a tool designer later as a truck designer.
Again through the influence of Galamb, Farkas was given another opportunity to work for Ford Motor Co. In October, 1913 he was given charge of the experimental drafting room
By this time Farkas was married to Helen Louoise Parshall. They had four children.
In 1915 Farkas was chosen to design a new tractor, which became the Fordson. Farkas laid out the engine first, which was then produced by the Hercules Motor Co. Then he designed a three-speed transmission and a rear axle driven by a worm grear. Mass production of the Forson commenced in 1917 and it went on to become another success story.
Later Farkas was also involved in the design of the Model A chassis – clutch, transmission, axle, suspension and braking system.
With Raymond Laird assisting, Farkas designed and developed production methods for the welded wire wheels introduced on Lincoln motorcars.
Later, in 1936 he designed a small 60-hp V8 engine companion to the 85-hp engine, which served well during the World War II years when gasoline was in short supply.
During World War II Farkas worked on refinements of B24 bomber components.
He retired in 1947 and passed away in February, 1963. 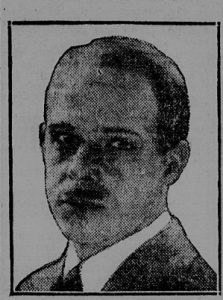 So far here’s what we know of Jules Haltenberger. He was born in 1885 in Kosice (Kassa). His father was Bela Haltenberger. In his passport application in 1923 he claimed that he emigrated to the USA in 1911 from Toronto in Canada. It is fairly certain that he was in the USA before that as there is a letter in the estate of Joe Galamb claiming a duell bwetween Gyula Haltenberger and Eugener Farkas. So probably Haltenberger, just like the others were moving around before settling at a company.
In the case of Haltenberger that company was Briscoe. In 1915 he became chief engineer at the Jackson, MI-based company, where he designed their new 1920 model before resigning.
In the mid-1920s he tried to arrange the American licence production of the British sleeve valve engine, designed by Peter Burt. Eventually General Motors “took up the manufacturing rights, but they did little with them” says a story on the history of Argyll.
Later on Haltenberger worked as a patent engineer. Not much is known about his life after the 2nd World War. He died in 1985.

While COVID-19 restriction are slowly easing up in different countries in Central and Eastern Europe – We will start to keep you updated with this year events. Please don’t forget to check restrictions in each country before planning visit to the events as they can be canceled or moved.