An intriguing one-off Hungarian car is now for sale. Officially based on a Willys Jeep, there are parts from around 20 cars. We checked out the car.

At this moment details are sketchy. We need to find the 1980s magazines which describe the car. What we know for sure that it was built by Gyula Szabó, a technical forest engineer, who lived in Pusztaszemes at the Balaton Lake some time during the 1980s. It took him hundreds of hours. Chassis was from a Willys-Jeep, the engine originally came from a GAZ Volga, while the body was formed from aluminum panels. It is claimed that a few parts from an early 1900s Mercedes, which formerly belonged to legendary Hungarian actress, Sári Fedák also found their way to the car – but this story couldn’t be verified.

The Balaton Taxi as it was unofficially nicknamed was a very popular sight in the 1980s and early 1990s in Szántód, Balatonföldvár etc. Someone even sent us this picture of the car used for a wedding 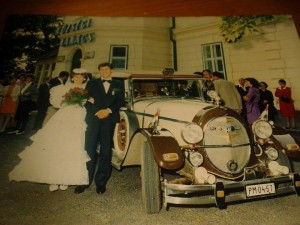 When Gyula Szabó died, the car disappeared. It was claimed that his family took the car abroad. But earlier this year, it was offered for sale on a Hungarian classified ads site. Its current owner was not able to add much background info. The Balaton Taxi is currently powered by a six-cylinder engine from a GAZ Molotov truck, with a carburetor from a Dacia. “We found some really ‘interesting’ technical solutions, like the wiring. It took a while to figure out how it was envisioned. And then there are the welded wheel rims. Rear wheels were taken from a field kitchen. I just bought four of those” We took the car out for a quick spin. The interior is very comfortable. The ancient hand-brakes are just welded there for show purposes.