After the first World War Emil Bojda (1903 – 1974) started as a businessman in Ostrava. He and his wife Žofia founded their own company in Třebovice (at that time the municipality and since 1990 district of Ostrava city, Czech Republic) and started to operate in the field of road transport. Several vehicles, which had the character of crossed hammers on the door and the sign of Autodoprava Bojda (Autotransport Bojda), transported the material for construction, which was on the rise at that time. They worked very successfully and in 1933 in Třebovice they built metalworker factory for the production of electric appliances. Mr. Bojda hired several dozen of people who produced high quality and modernly designed single- and double-beds, stoves, irons, ironing and sawing machines under the brand EMBO.

In the 1930s, motorcycles were particularly popular in Czechoslovakia. Amateur races have been organised, and Bojda was also enthusiastic about it. His passion for mechanics and motoring has slowly morphed into the plan to build a car factory in which he will start producing a people’s motorcycle and a car. 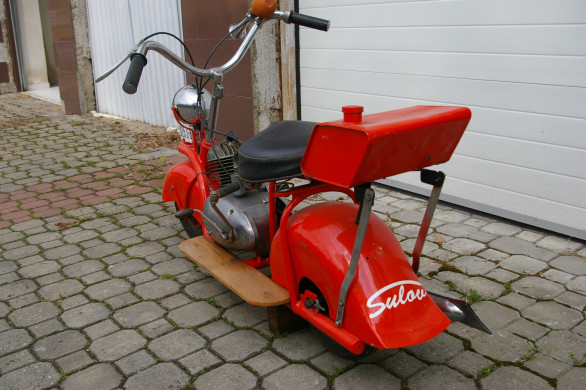 During the protectorate, Bojda did not stop production. Although he wasn’t involved politically, yet was later his pragmatic approach perceived negatively. He did not fire his staff and did not close the factory. His dream of developing as a vehicle manufacturer was stronger than politics. He began to draw the first designs of a popular motorcycle and car. He plotted dimensional studies and invented constructive innovations. He believed that after the war he would give people a cheap and reliable vehicle.

The war ended and the elections came in 1946. In the Czech Republic communists won, while Democrats conquered in the Slovakia part. The situation in the Czech Republic was an unfavorable environment for entrepreneurship. Newspapers were published with fictional stories about how Factory Faux deceived and cheated and how he exploited employees. At the EMBO plant, they imposed a temporary administration.

Staff protested and Mr. Bojda received a fine of 50-thousand crowns and a public reprimand. At the same time, he was increasingly accused of collaborating with the Germans, corrupting German authorities during the protectorate, and even for his electric cooks heating tea to German soldiers at Stalingrad. His factory had fewer than 50 employees and could not be nationalized under the law. However, it could be confiscated if the owner was recognized as a collaborator, so a smear campaign has been instigated.

Mr. Bojda decided that he will rebuild his company in the Slovakian part of Czechoslovakia and selected Hrabová (now part of Bytča). He set up the production hall and transported the machines from Třebovice. On a nearby hill he started to build a hotel as well. The factory was finished in 1947. The new project called Súľov and in parallel with the production of electrical appliances, the production was also oriented to launch both motorcycle and automobile production. Despite all the problems, Bojda believed that the political situation will change and common sense will prevail. Employees were provided social background and further education. The strongest motive for not giving up was his dream of producing automobiles.

The Local National Committee in Hrabová on February 8, 1948, “appreciated the outstanding merits of the master of Emil Bojdu for his construction work on the elevation of the Hrabová village and unanimously accepted at his meeting on January 21, 1948 to grant him honorable citizenship to the village of Hrabová.” At that time, the first functional prototypes of the Súľov motorcycle and automobile have been completed.

The motorcycle had a simple construction that made it possible to be driven by a small 15-year-old or even adult man. Tires were manufactured by Baťa and the Manet engine was supplied by Považské strojárne “Povazské Enginnering Works”. Everything else was done in the Súľov factory. The fuel consumption of the motorcycle was only two liters for 100 km during a ride. The registration number on the front fender has S as Slovakia and BA as Bytča. The motorcycle has been preserved by son Jozef Bojda and still works seamlessly. The small car had a rear engine and a length of only 2200 mm. Unfortunately, the vehicle has not been preserved. In the 1950s, the only prototype ha been sold to Poland and unfortunately we don’t know more about it.

After winning the February Winners Cup, things took a different direction. A warrant came from the Czech Republic and the factory was confiscated. A whole year he was hiding in Slovakia and nine years in the house in Třeboňice. It was home imprisonment for his family.
After years spent in the cellar and his secret workshop, his envy neighbors reported him to the authorities. Bojna got 8.5 years in Leopoldov jail, which after the intervention was shortened to 2.5 years. However, the engineer and entrepreneur broke so much that he had never tried to develop new motor vehicles in the Czechoslovakia. They destroyed an extraordinary man and his dreams that became reality for a short time.

We would like to express our sincere thanks to Maroš Schmidt from Slovenské múzeum dizajnu and Denník N for assisting us with photos and source data for this article.