Former East German car manufacturer from Zwickau (VEB Sachsenring Automobilwerke Zwickau) have celebrated 60th anniversary on 7th November 2017. The Trabant is one of the iconic cars from behind the Iron Curtain. Between 1957-1991 approximately 3.7 million cars were manufactured. 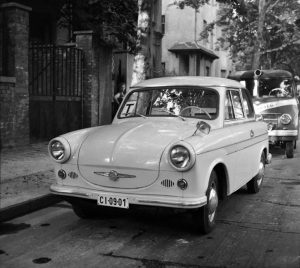 Not sure if it’s a coincidence about the name and the start of production on 7th November 1957. On that very day was the 40th anniversary of the Bolshevik revolution and one of the meanings of the word “Trabant” is satellite which refers to the huge success of the Sputnik I. satellite, which contributed to the technical progress and was launched just a month before. 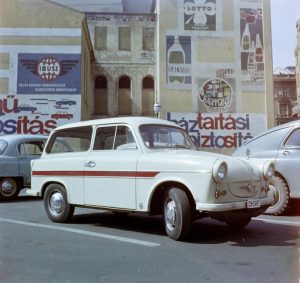 Chief engineer Werner Lang and his team used the West-German Lloyd LP 300, as a benchmark. Some of the specifications were similar, but the East German used a special material, called Duroplast in place of sheet metal.

The predecessor of the Trabant, the AWZ P70 from 1955 was a stopgap solution, introduced when the pre-war DKW-based vehicles became hopelessly outdated. The P70 was replaced with the P50, which was unveiled in late 1957.

The best-known Trabant is the 601. It was meant to be a temporary model, until a “proper” small car arrives on the market. However due to COMECON economy policies and new car market regulations, it remained in production between 1963-1991.

Fun fact is that the Trabant was not meant to be a car. It was originally devised to be a step up from motorcycles with sidecars, a sort of upgraded bubblecar. It had to be a simple construction for 2 adults and 2 children with a 500 cc engine (later upgraded to 600 cc) and minimal weight, hence the use of Duroplast.

Trabant was a cheap’n’cheerful machine. It took years, sometimes 3-4 years (or more) to obtain one. It was not as in Western Europe. And it was very cheap. Our co-editor, Libor Kiss recalled that in the 1970s in Czechoslovakia it was sold for 36.500 CSK, while Skoda and Wartburg or Lada cars went for nearly double that price around 56.000 CSK. 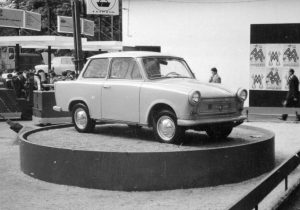 Though Trabant engineers tried to work on updates, the Party did not want to hear about that. Demand was strong – remember, you had to wait 3-4 years! It was the same story with Skoda, Wartburg et. al. – no chance for proper development.

When the Berlin wall fell and the two Germanies were re-united the fate of the Trabant was sealed. For a short time a four-stroke version was offered, but to no avail.

History cannot be changed, but Trabant will be always an iconic car in automobile history. Even we hate it or love it, there are poems and songs written about “Trabi”.

In the next few weeks we’ll be introducing you some Trabant-based specials! Stay tuned!